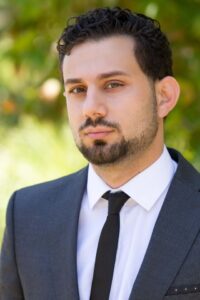 At the Law Offices of Atousa Saei, Associate Kian Moghbeli is rapidly gaining an impressive reputation for his legal skills in handling many of the intricate details for the firm’s family law cases.

With his sharp focus on discovery, research, the preparation of motions, and his ability to compose compelling briefs, Moghbeli has become an important asset to the Saei firm. His philosophy—that of listening intently to a client’s needs—has assisted Managing Partner Saei in structuring individual strategies designed to cater to each client’s case in a very personal and significant way.

Prior to his affiliation in 2011 with the Law Offices of Atousa Saei, APLC, Moghbeli worked at Ardalan and Associates in Sherman Oaks and Gary A. Rosenberg in Woodland Hills, CA. As in intern he helped that firm with various details relating to its personal injury, insurance defense and family law cases. It was that same year that he also became a member of the State Bar of California. Today, though interested in all aspects of family law, Moghbeli most enjoys sorting out the many complexities inherent in dividing property and financial assets. (Read more)

Ranked high at the top of his class—named to both the Dean’s and President’s Lists several times—Moghbeli earned a Bachelor’s degree in Sociology from UCLA in 2005, and his Juris Doctorate from the University of San Diego in 2008. He also studied abroad in Barcelona, Spain, as part of an exchange student program at USD where he studied European Union Law and International Contracts. During his college years, Moghbeli not only achieved high honors for his academic achievements, but also for his work as a volunteer within the legal community. For the past five years, Moghbeli has been active in several pro bono programs with the L.A. County Bar Association, helping individuals and families with a variety of legal needs such as mediating family law issues and even matters related to tenant/landlord disputes. In addition, he has provided his pro bono services to the Neighborhood Legal Services departments for both the Van Nuys and the Pasadena courthouses.

Born in Iran, Moghbeli lived between Tehran and London with his family. During his younger years, he also lived in Boston, Tokyo and parts of Europe. Ultimately, at the urging of an aunt, his family finally settled in Southern California. A long-time resident of the San Fernando Valley, Moghbeli excelled in sports during his elementary, junior and high school years. He proudly points to his win in a speech contest in junior high school as the event that paved the way for his interest in law. Another major achievement was to donate a considerable amount of time helping a friend rebuild the Van Nuys/Sherman Oaks Park.